St Ives boutique Beatengreen has gained national recognition as one of the top vintage stores in the country. The business, run by Matt and Kerry Knight, is one of just 25 to be nominated in the Homes and Antiques Magazine Awards 2013 in the category of Vintage Shop of the Year.

Kerry, who trained as an interior designer, said the nomination from the magazine, the respected voice of the industry, was “a fantastic surprise and has given us a real sense of achievement.” Beatengreen is entering its fifth year and has gathered a loyal following. “We’ve worked very hard to create a unique and inspiring store,” says Kerry, “each and every item is carefully chosen and many vintage pieces have to be painstakingly restored and nurtured back into top condition.” 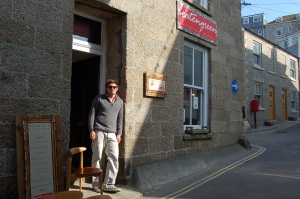 The Homes and Antiques Magazine Awards were created to celebrate hidden gems such as Beatengreen, stores which are “eco-friendly, packed full of beautiful, intriguing objects and redolent with the thrill of the chase.” Other nominees include Cristobal, a costume jewellery specialist, Barter Books, a vast second-hand store housed in an old railway station, and Elemental of Spitalfields which sells everything from industrial lighting to mahogany shop fittings.

The 25 nominees were whittled down from a vast nationwide selection by industry experts. The awards were then opened up to a public vote, the results of which will be announced at The Decorative Antiques & Textiles Fair in Battersea on 25th April.